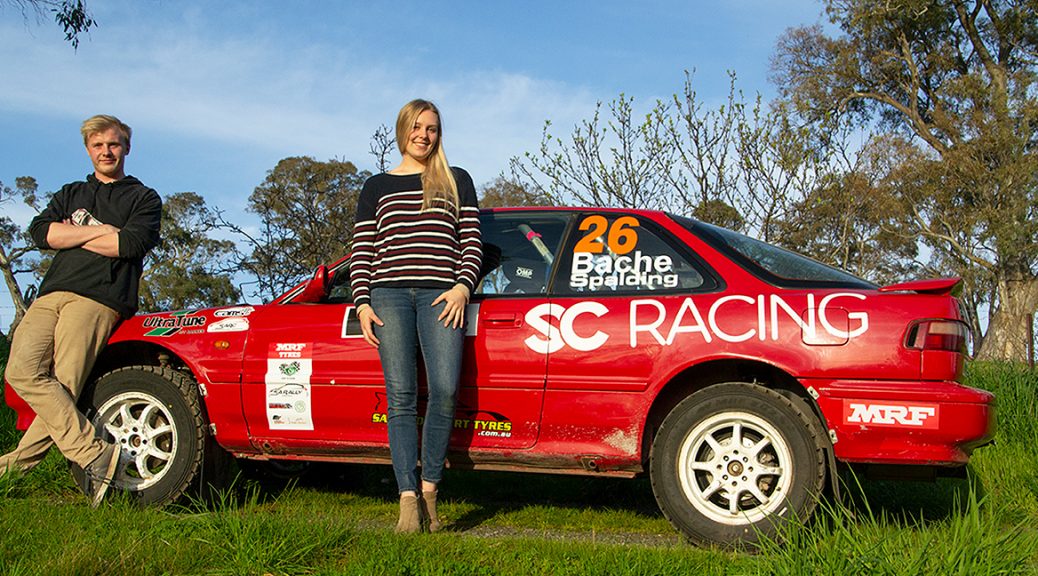 Dirt roads, valleys, hill climbs and hairpin bends feature once again in the Adelaide Hills Rally from 19 – 22 September. This rally is a ‘fan and driver favourite on the Australian Rally Championship (ARC) calendar,’ said Stuart Daddow of Ultimate Motorsport Events (UME). South Australia has featured on the ARC calendar for 17 years and this is the second year of UME’s official Adelaide Hills Rally (AHR). The many stages include Lenswood, Mt. Torrens, Charleston, Harrogate and Mount Crawford Forest. This year’s rally promises a true festival atmosphere starting with a street party in Mount Barker on Thursday 19 at 6pm.

Mount Barker local, Molly Spalding, is competing in her second season of the South Australian Rally Championship (SARC). Molly says she started late, obtaining her CAMS racing license at 18, but she hasn’t looked back and is now a Junior Development Program instructor with the Southern Districts Car Club. Molly instructs many students, including girls aged between 12 – 17.

Hahndorf local, Zayne Admiraal grew up with rally car racing, sharing his father’s passion. At 12, Zayne joined the Junior Development Program with the Southern Districts Car Club, where he learnt the basics of car control. He started competing at the age of 14 — and eventually started beating his dad! Now, in his twenties, Zayne has several SARC Round wins and a third in the 2018 Australian Rally Championship category of the Adelaide Hills Rally (AHR). Zayne is currently in the lead for 2019 as they head into the final stages of the AHR.

Molly lives on a 13-acre property with loads of space to work on her cars. She said her dad doesn’t even mind that she’s taken over the shed! Knowledge of mechanics is a must for rally drivers because of the need to fix their own cars while competing (outside of service stops). Molly decided to learn mechanics by building a car from the ground up, giving her the added advantage of knowing her own rally car inside out. Over eight months Molly worked on her car with Zayne at SC Racing in Lonsdale. The shell of the car is a 1991 Honda Integra with a substituted 2.4 litre 2006 Honda Accord engine. They had so much support from the rallying community that Molly ended up with a superb car built in record time.

Molly and Zayne both rely on their co-drivers, Liam Bache and Matthew Heywood. Zayne explained the co-driver’s role is to ‘read the road out to the driver during the race’. A few days before the rally, the drivers and co-drivers take the course at the speed limit to familiarize themselves and record pace-notes. They determine the severity of every turn and translate it into the safest possible top speed. Zayne said, ‘when you’re going at the speed limit and writing your pace notes, it can take a long time, but the more seriously you take it the better the results on race day.’

As self-funded drivers, Zayne and Molly both work during the week to support their passion. They rely on various local sponsors, painted in colourful array on their cars and Facebook pages:  (Mollyspaldingracing and SCrallying). It’s a community-wide effort with local councils, businesses and organisations working with UME to keep the Adelaide Hills Rally — a real crowd favourite — on the Australian Rally Championship calendar.

Tickets for Anderson Hill Winery, The Bend Motorsport & Ceremonial Start available at www.outix.co . Please visit UME’s website, ume.cool, for more information on rally maps, spectator locations, road closures and contacts. Volunteer officials get the best seat in the house and training is provided, contact UME via their website or email secretary@ume.cool to volunteer.