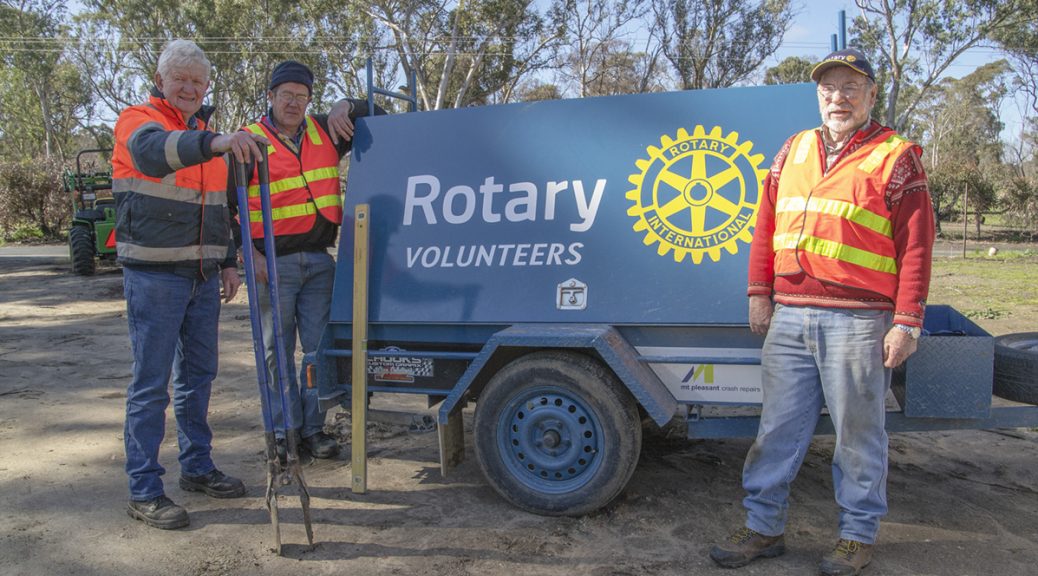 Hills families often pass on practical skills to the next generation. This was perhaps even more so, sixtyish years ago, when several of the Onkaparinga Rotary Club members were lads and the adults in their lives shared knowledge in a traditional apprenticeship of the land. Honed over the years, those skills have resulted in centuries of combined expertise within the Club.

Rotarian Gordon Brice describes these talents as ‘bush kid skills.’ He explained that about eight of the members are often called upon to fix fences, particularly after natural disasters like bushfires.

The concept of fencing seems simple at first—we are all familiar with borders and boundaries, of the visible and invisible kind. Physical and metaphoric borders mark ownership, freedom, division, protection, and warning. But as in life, the physical fence comes in many varieties for many purposes. In some cases, the size of a property is the main consideration, but then there’s the terrain, the animals, the purpose, and the type of fence to think about as well.

The fencing experts of the Onkaparinga Rotary Club frequently work alongside BlazeAid Inc. These two operations complement one another via volunteers, equipment, and expertise. BlazeAid’s workforce is not as specialised as the Club’s, but through sheer volunteer numbers BlazeAid supports landowners, families and communities, as well as providing labour for fencing and perennial pasture reestablishment (website: blazeaid.com.au). Experienced fencers are required for difficult jobs such as hilly/rocky terrain, high tensile or woven mesh wiring, wide expanses, and huge properties. And this is when the Onkaparinga Rotary Club is called in.

The Club’s fencing team first worked together for ten months after the Black Saturday fires in Victoria, 2009. Then they went to Port Lincoln after the Sleaford fires in 2012, then Eden Valley  in 2014, and the Sampson Flat fires (with BlazeAid) in 2015. They are currently working in the Adelaide Hills after the 2019 Cudlee Creek fire. These fencing jobs can go on for a long time, even decades, especially as people struggle with devastation and change.

Australian Rotary Clubs share assets and people wherever needed, whenever possible. The Onkaparinga Club has access to two Rotary District 9510 (SA) fencing trailers and the use of a ute, donated by Paradise Motors Mazda. In April this year, the Onkaparinga Club’s ute and a trailer went to Kangaroo Island with the Glenelg Rotary Club to assist with fencing after the bushfires.

Rotarian Dick Cuttle said that the Club has fantastic community support from local businesses and the community in general. Mount Pleasant Crash Repairs have refurbished both trailers, Coopers of Mount Torrens and Mount Pleasant continually provide fencing materials, and Emmetts of Oakbank sponsor the servicing and support of the tractor.

Everybody does what they can, and in turn this swings a full circle of support back into the community. The Rotary Club assists people in many ways, for example: sponsorships for local youth through forums and end-of-year awards; equipment sponsorships; transport; fundraising; and international donations. The goodwill just keeps going round.

The Onkaparinga Rotary Club meets every Wednesday night at 6:30 for 7pm at the Lobethal Hotel on Main Street, Lobethal. New members are always welcome, and if you’re interested in learning agricultural fencing, this is a great opportunity. They work flexibly every Tuesday and Thursday, weather permitting. For more information, please email onkaparinga.sec@gmail.com, visit their website (onkaparingarotaryclub.org.au) or Facebook page.