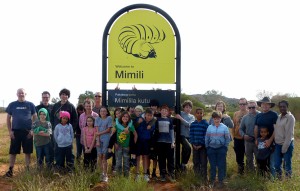 Pictured are the Basket Range ‘mob’ during their Mimili Trip.

Since 2001 Basket Range Primary School has participated in a eciprocal exchange program with the Mimili Anangu School.

Mimili is an Anangu community on the Pitjantjatjara Yankunytjatjara lands in the North West of South Australia.

Each year the schools take turns to visit each other.

This year some of the students, parents and teachers from Basket Range Primary made the long journey to Mimili.

The five-day trip commenced on Monday, June 9th with the group returning on Saturday, June 14th.
The drive was broken up with a night at Coober Pedy on both legs of the trip.

Pitjantjatjara is the first language of most students in the Mimili community and many do not have any formal English communication until they enter school.

In preparation for the trip the Basket Range students learnt some Pitjantjatjara phrases.
They were then able to attend a language lesson at the Mimili school.

The Basket Range mob camped out during their time at Mimili, with students exploring the area around Sunset Rock.

Year Three students Marnie and Phyre enjoyed climbing large rocks around the area. The students also described a near by cave occupied by a large colony of Bats as a highlight of the trip. Phyre added that the cave was also, “very smelly”!

Year four student Oliver who visited Mimili for the first time was most surprised by the landscape. He was not expecting there to be so many big mountains surrounding the area. Oliver was also surprised at the green grass and trees throughout the outback. The area has received substantial amounts of rain in recent months.

The trip provides many learning opportunities for the students with the Year Seven students helping to plan this year’s menu. The students worked with Principal Karen Church to plan the meals for the large group. The Year Seven’s assisted with the shopping before the trip and helped with the cooking and cleaning up throughout the trip. The campsite had limited facilities with most of the cooking being done on the campfire.

Year Seven student Ethan, who was on his second trip to Mimili, enjoyed catching up with students from the Mimili Anangu School.

Principal Karen sees the friendships the students create as one of the most important aspects of the program.

The Basket Range students and the wider school community benefit greatly from experiencing the Indigenous culture.

There are many differences between the two communities, however, it is the similarities that help to bind the two schools together.

Karen says that many of the Year Seven students mention the Mimili Exchanges during the graduation speeches as a pivotal moment in their schooling.

Basket Range has again extended an invitation for the Mimili Anangu School to visit in 2015.