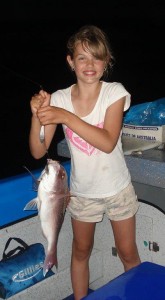 As the South Australian Snapper fishingseason got into full swing earlier this year, a group of keen Kersbrook locals took to the waters to try their luck. The group took advantage of a secret location off the shores of Port Pirie, during a fishing charter. The fishing trip proved to be quite the success for the hills dwellers.

Snapper fish are found throughout the waters of Southern Australia, with juvenile snapper usually located within the safety of inlets, bays and sheltered marine waters. Adult fish are often found around reefs, limestone ledges and man made structures. Snapper fishing is only permitted at certain times of the year and there are restrictions around known spawning locations from mid December to the end of January. The minimum legal size for Snapper fish is 38cm with fish over a length of 60cm classified as large. Snapper closures have been put in place to protect the species, allowing for more fish to reach maturity and for populations to remain stable.

Fishing from 8.30pm to 5am, the friends were able to reel in up to fifty snapper. Thirty of the distinctive pink fish were returned to the sea with a total of nineteen snapper of legal size caught. The fishing trip was very successful for eleven-year-old Taylah Cowling (pictured right) who came away with the catch of the day, a 72cm snapper! Taylah snagged several smaller fish (one pictured right) throughout the boating adventure, before landing the largest fish she has ever caught, as well as the biggest fish of the expedition.

Taylah who embarked on just her second fishing trip, took three to five minutes to reel the large Snapper onto deck. “It kept on going back down after I got it to the surface”, says Taylah. While the eleven year old took on most of the hard work reeling in the fish, she admits she had a little help.

“Joe gave me the tiniest little bit of help to keep the rod up a bit”. “The fish put up quite a fight and my arms were really sore”, she added.

Taylah gave away her prize Snapper, but was still able to have a seafood feast after her hard work on the fishing charter. While the Captain was cleaning the catch of Snapper, the group trapped some thirty-seven Blue Swimmer Crabs. “We gave the fish to my Uncle, but we ate some of the crabs and they were yummy”, says Taylah. This fishing trip will not be the last for Taylah who described the experience as “really fun!”.