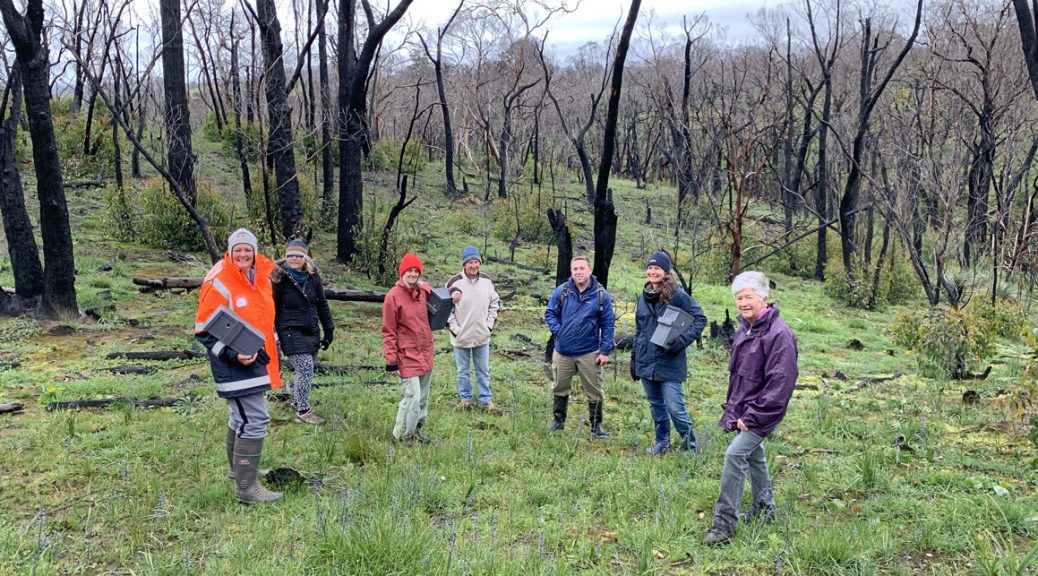 Volunteers from the Friends of Lobethal Bushland Park assisted Conservation Volunteers Australia member, Darren Kennedy, with the installation of nine nesting boxes for the endangered Western Pygmy Possum. Historically found in the Mount Lofty Ranges, this species has only had 97 sightings over the past century.

Darren said that with the spring regrowth after the recent bushfires, Lobethal Bushland Park has the perfect habitat for the Western Pygmy Possums. These marsupials are small, nocturnal, and feed on nectar, so the native shrubs and flowers in bloom right now are a real drawcard. It is hoped they will settle in the Park where this project can monitor and protect them using non-invasive observation of the boxes.

The Western Pygmy Possums are known to travel up to 5km from their nest, and considering their size, this is no mean feat. Darren is optimistic about their usage of the boxes because on past projects, the possums have been observed in the nesting boxes within four weeks of installation.

Darren said that for small mammals like Pygmy Possums the biggest threat is the loss of habitat, loss of natural nesting locations (removal of dead trees, hollows), the degradation of habitat (bushfires, erosion), and feral predation (cats and foxes).

These nesting boxes not only provide information for research and protection in the future, they also provide a safer environment for the Western Pygmy Possums right now.

While assisting with the installation of the nesting boxes, Friends of Bushland Park volunteers also noticed promising signs of flora and fauna returning to the Park such as a well-known family of kangaroos and their young, signs of echidna diggings, and vivid ground cover alive with native grasses, shrubs, lilies and orchids.

Billy-Jo said that making a post-fire comeback are some of the middle storey shrub species that could provide nectar resources for the possums in the future. They include Beaked Hakea (Hakea rostrata), Christmas Bush (Bursaria spinosa), and Heath Tea-tree (Leptospermum myrsinoides).

This project in Lobethal is part of the bushfire recovery effort in the Park. The boxes were made and donated to the Western Pygmy Possum project by the Enfield Men’s Shed and should last for up to ten years. They are made of 22ml untreated pine with a tiny entrance hole (the size of a 10-cent piece) that limits larger animals and birds using the boxes. The possums will not be handled or disturbed in their new habitat as monitoring is completely non-invasive.

For more information about the project, please contact Tonia Brown at the Adelaide Hills Council on 8408 0400, Friends of Lobethal Bushland Park on Facebook (@FOLBP), or visit conservationvolunteers.com.au website.